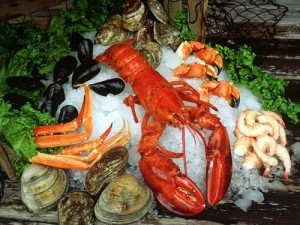 Ethnic cuisines offer some of the easiest and most delicious ways to prepare seafood. Some of the more famous seafood dishes originate from Spain, Italy, the UK, Germany, Norway, Mexico, Japan, Vietnam, Thailand and other regions.

Seafood enchiladas are another very simple Latino dish to prepare. A typical enchilada recipe is the foundation of the meal, with tortillas being filled with vegetables, sauce and practically any type of boneless fish. Once assembled, the enchiladas are arranged in a casserole dish and covered with more sauce, cheese and spices.

Spanish cuisine offers several classic seafood meal choices. Paella, a traditional dish, is a colorful mixture of saffron-flavored rice and meat. The name refers to the paellera, the flat, round pan in which it is cooked. A traditional paella is cooked outdoors, over a wood fire. Seafood used in the dish includes clams, shrimps, prawn, lobster, mussels or squid.

Several dishes from Europe and Scandinavia feature salted or smoked fish and rich sauces. German style haddock and potatoes is a good example. The meal pairs delicious salted haddock with hearty white potatoes, both items that can be stored during the long European winter. The recipe calls for alternate layers of potatoes, fish and onions. Eggs are beaten and folded together with sour cream, pepper and mace, then poured over the potatoes. The dish is then sprinkled with breadcrumbs and additional butter and baked slowly.

Haddock is also very popular smoked in Europe and Scandinavia where a famous product is finnan haddie. The real finnan haddie consists of North Sea haddock which has been gutted, split and smoked. In Scotland, it is traditionally served at breakfast or lunch but usually not as the main course of the meal.

Great Britain is famous for its simple yet delicious use of North Sea fish, especially cod, haddock, sole and plaice. The meal, which originated as a result of the industrial revolution, consists of battered, deep-fried fish and sliced deep-fried potatoes. The meal has gained a strong urban following that continues to present day, with British style “chip shops” being famous not only in the United Kingdom but around the world.

Italy, known for its cuisine, also makes extensive use of fresh seafood. Cioppino is a classic Italian fish stew made with a mixture of fish and shellfish. The meal is not only popular in the home country, but also wherever Italian fishermen have settled. Depending on local species, the dish may contain fish, shrimp, crabs, mussels or other seafood. Other ingredients include wine, broth, herbs, garlic and butter.

Vietnam, Thailand and other Asian countries also utilize seafood extensively in meals. Among the top Asian meals are delicious soups, featuring a light broth, rice noodles and a variety of seafood that often includes prawns, mollusks and small fish paired with local vegetables, herbs and spices.