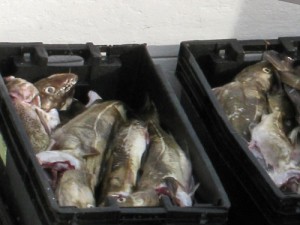 The Atlantic cod is an open ocean fish found on both sides of the North Atlantic. In the Northwest Atlantic cod occur from Greenland to North Carolina. Cod are also found off the coast of Iceland; and along the coasts of Europe from the Bay of Biscay to the Barents Sea. The northeast Arctic or Arcto-Norwegian stock is known to be the world’s largest population of Atlantic cod.

Atlantic cod occasionally reach lengths in excess of 5 to 6 feet and live up to 25 years. Offshore cod tend to be larger than fish caught from inshore areas. Cod typically weigh 25 pounds and may be 40 to 42 inches in length. They feed on prey such as herring, capelin, shrimp, krill, sand eels, and crabs.

Cod can be baked, broiled, poached, fried, made into cakes or chowder or salted for long term storage without loss of flavor or nutrition.