Seatrout are members of the drum and croaker family of saltwater fish. Seatrout are landed by recreational anglers and commercial fishermen. Seatrout have full flavored, somewhat oily flesh.

The spotted seatrout, also known as speckled trout, is common throughout the Southeast. Spotted seatrout are valued by recreational anglers as a sport fish as well as a food fish. 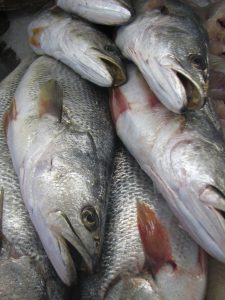 Weakfish are dark olive above, with iridescent blue and copper sides, and silver-white belly. Other identifying features are yellow fins, large canine teeth in the upper jaw and dark spots on the upper part of the body, sometimes forming diagonal lines.

Adult weakfish typically range from 12 to 18 inches but can grow up to to 3 feet long and weigh 4-18 pounds. The name “weakfish” comes from the fish’s fragile mouth, which tears easily when hooked. Weakfish is the state fish of Delaware.

Other names for the species include gray trout, yellowfin trout, and seatrout.

Sand seatrout and silver seatrout are known collectively as  “white trout.” Both species are common in the Gulf of Mexico. Although smaller in size than spotted seatrout and weakfish, white trout are often harvested for food by recreational fishermen.