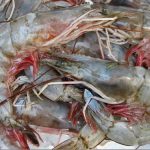 According to the South Carolina Department of Natural Resources (SCDNR), shortly after the first week in January SCDNR staff and members of the public began reporting dead fish and shrimp along the shores of tidal marshes and saltwater impoundments.

As a result, the agency acted to protect surviving white shrimp by closing the trawling season in state waters on January 10, 2018 and requested NOAA Fisheries do the same in adjacent federal waters.

Shortly afterward, the Georgia Department of Natural Resources (GA DNR) closed state waters to trawling on January 15, 2018 and also requested a federal closure. According to GA DNR, observations of recent water temperatures and catches suggest one of the worse freeze kills in the 41 years it has been conducting monitoring surveys, with a 96.1 % reduction in white shrimp abundance from December 2017 to January 2018. White shrimp is the most valuable commercial fishery in Georgia.